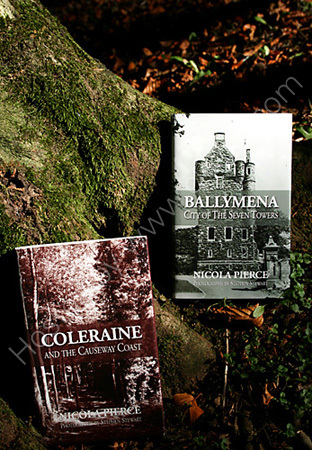 I was commissioned by Brehon Press to produce photographs for two books in 2007 and 2008. The first book entitled, ‘Ballymena City Of The Seven Towers’ detailed the people and events that shaped the history of Ballymena over the years. The book contains information on a wide-ranging list of topics: from the numerous links to the American Presidency, the industrial heritage that helped make Ballymena an important centre of commerce to the ghost stories that permeate the area.


In 2008, ‘Coleraine And The Causeway Coast’ was released. This book detailed key events of the Triangle area, mainly centring on the town of Coleraine. Within its pages it tells the story of the oldest settlement in Ireland of Mountsandel, the development of Coleraine as a result of the Plantations and also the history and mythology surrounding the grandeur of the Causeway Coast.


Both these hardback books were sold exclusively in Waterstones Stores in Northern Ireland and on Waterstones website. The paperback version of the Ballymena book is now available from all good local bookshops in the surrounding area and online at amazon priced £6.99. You can still purchase, ‘Coleraine And The Causeway Coast’ hardback at Waterstones in Coleraine and Ballymena, priced £8.99 or on www.waterstones.com